Face to face between the President of Faso and Farmers: Truths of Mamadou CISSOKHO

The 19th National Farmer day closed its doors on April, 30th 2016. Well known for his outspokenness, Mamadou CISSOKHO, honorary Chairman of the réseau des organisations paysannes et de producteurs de l’Afrique de l’Ouest (ROPPA) didn’t beat about the bush to tell some truths during the face to face between the President of Burkina Faso and farmers.

Mamadou CISSOKHO during his speech at JNP 2016

To start his speech, Mamadou CISSOKHO, tries to explain to the participants the divide between farmers and States. This divide does have a history and it dates back to the colonization. At that time « teachers were saying to pupils: if you don’t get good grades at school, you will go to farm », he recalled. The other divide was about the feeling that the farmer had when you’re asking him about his occupation. For Mr. CISSOKHO, this one had a devalued status to the point that he was thinking he was « nothing ». 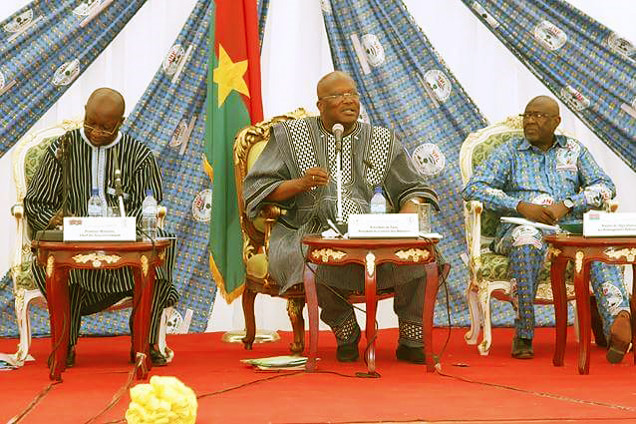 Respect: a debt of State towards farmers He talked about another issue without beating about the bush; it is about Structural Adjustment Plans that broke the confidence between State and farmers, which provide yet the essential of the Gross Domestic Product. “It is thanks to the hoe they sent children to school […] it is cotton that paid salaries, build roads », he specified. For all those reasons, Mamadou CISSOKHO thinks that the farmer deserves much more respect and recognition. A recognition that is like a debt of the State towards “those who invented soil fertility when it was impossible to grow in Burkina Faso because of the drought »

« We are the majority of this country and we have only one principle of partnership; we never want and we will never be a cart that we use and let afterwards. We control our future », said loud and clear Mamadou CISSOKHO. For him, the Confédération Paysanne du Faso (CPF) like the other organizations “doesn’t intend replacing anybody” for the first principle remains “respect and recognition of State authority”. « We elected you so that you are at our service and the person who accompanies cannot take the lead », clarified Mr. Cissokho. He hopes that studies on the setting up of the next bank of agriculture, announced by the Prime Minister Paul Kaba Thieba, will be done with farmers. “We don’t conduct any study on agricultural bank; we will set up the agricultural bank with our ideas and populations ». « The third world war will be done around food and water » predicted the honorary Chairman of ROPPA who is convinced that the first sovereignty is food. « Today, we are independent. If i look at my cousin Fulani drinking powder milk from Europe, I’m wondering what is the importance of the Fulani in our countries” continued Mamadou Cissokho. Retaking lands to give back to those who use it he was outraged because he noticed that there are more walls than trees from Ouagadougou, via Zorgho and Koupela. “I saw walls of 1km, 500m. We will not eat the concrete. Government has to take measures to protect farmlands for the future of our Nation is there. We cannot let well-to-do people building walls around fertile areas of the country. It is dangerous », he said. To this end, the President of Burkina Faso declared that afterwards, state would take measures to take way lands from all those who don’t value them. Appeal for union « Our home is sick; there are flaws, conflicts and we need to be courageous to settle them », backed Mamadou Cissokho for a sustainable movement is a movement that accepts self-criticism. For him, farmers will have to be united to fight for their destiny for “Future looks bright for Burkina Faso agriculture”. Source:Lefaso.net http://lefaso.net/spip.php?article70910