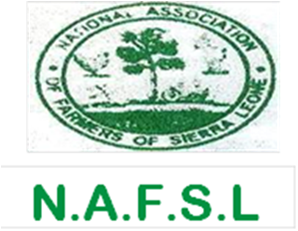 The National Association of Farmers of Sierra Leone (NAFSL) is an umbrella organization for farmer’s organizations (FO’s) and agricultural producers at village level. The small-holder farmer and their organizations play a decisive role in ensuring sustainable rural development and food security. Most of them are poor and not fully integrated into the national economy as agricultural policies and related investment programs have not been favourable to small farming.

NAFSL was founded in 1976 as an independent non-political network to harness the initiatives of small farmers and organize them into Farmer Organizations (FO’s) at village level to undertake the task of lobbying and advocacy with decision makers at national, regional and international levels. The association seeks to reinforce the network of FO’s not only between themselves but with other national and international actors for the purpose of involving them in the definition and elaboration of rural development, food security and agricultural policy.

NAFSL is a well structures organization hierarchal in nature comprising farmer organizations in the 149 chiefdoms, 37 village areas in the western region and 14 administrative districts of the country. At the apex of the organization is the National Executive Council headed by a PRESIDENT. The members of the executives are elected by the National Delegate Conference (AGM) for a period of five (5) years. The association id governed by a constitution founded on the tenets of democracy and food governance – the elected representatives and the technical and support staffs at the secretariat are responsible and accountable to the members.

NAFSL as a civil society network is registered as a non-governmental organization (NGO) with the government line Ministry of Finance, Development and Economic planning and also the Sierra Leone Non-Governmental Organization (SLANGO). NAFSL became the National Platform of the Network of Peasant workers and Agricultural producers organization od West Africa (ROPPA) on its admission as member in March 2007.

The total membership of NAFSL as at now stood at 580 farmers groups/producers organizations. Capacity building including meetings and policy consultations among FO’s, training and technical backstopping and implementation of gender strategies are coordinated with the network.